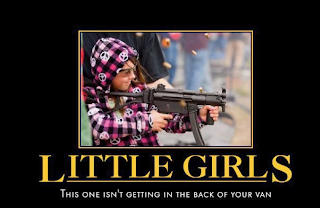 When this image went around Facebook recently there were two reactions to it: one cheering her and her family on, the other reminding us of the toll guns take, especially on the innocent.  On the pro-gun side was the feeling that this girl will never become a victim because of her ability to wield this automatic weapon and that she may even one day become a defender of freedom, fighting for her country (presumably the USA).  Another strain of thinking are that  guns are the great equalizer for girls and women in a world full of crazy, unpredictable, and dangerous men.  Of course we also notice that she's wearing a hoody with peace signs showing a big disconnect in our culture regarding the meaning of peace.

My personal stand on guns is not as clear cut as some of my fellow pacifists.  Certainly I have abandoned the gun, the knife, the sword, the nun-chucks, the death stars, tasers and even the pepper spray, as my form of self defense.  I have adopted instead the form of defense used by Gandhi and other great leaders, my heart and my mind, or love.  Most of those great leaders that I'm thinking of ultimately died by the gun, assassinated.  But, the reality check is that if Gandhi or Dr. King had taken up the gun to start with, their time on earth would have most certainly been shortened by many more years.   But that's another discussion regarding large nonviolent movements, not the safety of home and family which seems to be the greatest concern evoked when looking at this image.

To start let me qualify my opinion with my own history.  I grew up eating venison and elk, a child of the great Northwest.  The animals had been hunted, cleaned and dressed by my father and grandfather.  I saw the deer cleaned.  I fondly remember the warmth of wrapping myself in their musky hides.   I even played with a severed foreleg from a deer for several days, fascinated by the way the tendons caused the hoof to flex.  My mother eventually took it from me, scolding my grandad for letting me play with this "dead thing".  I learned to fish and clean and cook my own catch from my grandfather.  I'm not easily grossed out or timid when it comes to hunting.  My ex-husband is also a hunter and although I refused to eat the dead squirrels in the freezer, I didn't faint from them being there.  It was part of his Kentucky heritage (yes, they eat rodents in the South and that's just the beginning).  I learned to shoot a gun from my father.  I enjoyed going to the shooting range with my husband.  So this is part of my heritage too.  But I have changed in my attitudes over the years.  But just as I'm not a militant vegetarian, I won't force my opinions on others, or condemn their choices as "wrong".  My world has never been black or white, love or hate, not even gay or straight, I've always been one that finds some middle ground, or something more akin to a tightrope, on which to walk my walk  This quote from Gandhi makes me wonder if didn't also have moments on the tightrope over this issue.

Gandhi wrote in Chapter XXVII, "The Recruiting Campaign," in his autobiography, My Experiments with Truth:
'Among the many misdeeds of the British rule in India, history will look upon the Act depriving a whole nation of arms as the blackest.

I've spent a number of hours pondering this statement.  Some may say that Gandhi misspoke, or that he might have felt differently at the end of his life.  I don't know Gandhi's mind but what I see in this statement is the same message of fear I hear coming from NRA (National Rifle Association) that helps people sidestep skilful action and enter into the survivalist mentality pictured above.  Our culture associates guns with respect and the ability to protect and provide for oneself and family. Clearly even Gandhi succumbed to this argument.  But there is another reality, guns were designed for one purpose, the destruction of life.  So this is where my attitude begins to shift.

While living in the Bull Creek Wildlife Management area out in the swamps of Florida between Melbourne and Kissimmee I would keep a gun near my bed.  I was staying in a house, five miles from a paved road and a good 15 to 20 miles from any signs of civilization.  The gun wasn't to protect me against critters;  gators, wild boar and snakes of all variety.  The gun was for the people out there, many who bragged about killing based on skin color.  These people were also well armed so I'm not sure how I would have saved myself with the gun, but I found it reassuring.  My intent was to kill if anyone threatened me.  I truly believe I would have done so.  After leaving that place and encountering Buddhism I've had to look back on that intention with new critical eyes.  In my study I came to see that every moment and every thought is shaping what is to come, part of karma.  Karma isn't just in the physical action or the damage done in retrospect, but it is the intention as well.  So to keep a gun is to have the negative intention for my fellow beings.  Same is true for holding any weapon including the nuclear arsenal we continue to allow our government to hold.  That is Himalayan sized negative intention put into the world and it threatens all of us.

So what DO we teach little girls?  This image and its caption tell me that the author believes that girls are truly helpless without a big weapon.  Are you helpless without your gun?  Am I helpless?  I've managed to live 45 years without needing to kill anyone to survive.  Is my daughter helpless?  One thing I've told her time and again is that a man's Achilles heel is not his heel, and if a man ever tries to grab her she must hit and kick, even bite that tender area until he's crying on the ground and then run like hell.  Never, never let them take you anywhere.  But I also tell her that everyone she sees is hurting, but only a rare few will hurt her.  More importantly, we all need each other.  Within each of us are seeds for good and bad.  We cannot garden ourselves very well, so we depend on the intentions of others to water and nurture those seeds within us just as they depend on us to do the same for them.  If we go around looking at each other suspiciously, our hand on the butt of a gun, the wrong seeds will continue to sprout as they have been since the beginning of our nation.  Do we wish to be the Nation of compassionate people working for the well-being of this world and its inhabitants or will we continue to be the Nation of self-centered cowboys, cowgirls, gangsters, bankers and CEOs who value our possessions over life?  I know what my intention is.  I suspect that if Gandhi could glimpse the world today, the countless children killed or wounded due to firearms in homes, the dead black children in our inner cities, the school shootings, the nuclear arsenals, the white phosphor burns, the cluster bombs, the depleted uranium birth defects and cancers, he may very well have altered his statement.  All these weapons are all mind-made, and it is our minds that also hold the door to our freedom.

Water the seeds of good intention.

Reading your essay, I was reminded of another, longer essay that touches on pacifism and gun control. Here's an exerpt:

"Not-really-pacifist “pacifist” liberals, I find, often get wrapped up in a recurring ideological process of shedding and assigning guilt. I wouldn’t touch a gun. I’ll just call my paid servant the policeman to come and shoot my assailant for me. My hands stay clean of gunshot residue and other stains; he wields the horrid gun and the moral responsibility, and quandary, of using deadly force – which I’ll endlessly analyze with my colleagues over dinner."

IMHO, calling someone else to put their life on the line for yours and commit violence on your behalf is tantamount to committing violence on the 'hero'.

For the entire article: http://www.thepolemicist.net/2013/01/the-rifle-on-wall-left-argument-for-gun.html

Since this blog is on nonviolent solutions, it doesn't support calling armed men, whether in uniform or not, to settle conflicts. If there was a violent escalation happening near me the last thing I'd do is call the police. Antoinette Tuff didn't need a gun to save school children and herself, and even the armed young man threatening their lives. I advocate that people not give up their power to authority, or hide it behind a gun. Our real power is in our compassion and empathy. http://www.cnn.com/2013/08/21/us/georgia-school-gunshots