Nonviolence Works - A New Study Confirms What We Already Knew

I don't usually post other people's work, but this study is important to those who study nonviolence.

Nonviolence Is The Right Choice—It Works

Nonviolent resistance is not only the morally superior choice. It is also twice as effective as the violent variety.

That's the startling and reassuring discovery by Maria Stephan and Erica Chenoweth, who analyzed an astonishing 323 resistance campaigns from 1900 to 2006.

"Our findings show that major nonviolent campaigns have achieved success 53 percent of the time, compared with 26 percent for violent resistance campaigns," the authors note in the journal International Security. (The study is available as a PDF file at http://www.nonviolent-conflict.org)

The result is not that surprising, once you listen to the researchers' reasoning.

"First, a campaign's commitment to nonviolent methods enhances its domestic and international legitimacy and encourages more broad-based participation in the resistance, which translates into increased pressure being brought to bear on the target," they state. "Second, whereas governments easily justify violent counterattacks against armed insurgents, regime violence against nonviolent movements is more likely to backfire against the regime."

In an interesting aside that has relevance for our times, the authors also write that, "Our study does not explicitly compare terrorism to nonviolent resistance, but our argument sheds light on why terrorism has been so unsuccessful."

To their credit, the authors don't gloss over nonviolent campaigns that haven't been successes. They give a clear-eyed assessment of the failure so far of the nonviolent movement in Burma, one of the three detailed case studies in the piece, along with East Timor and the Philippines.

In some sense, the authors have subjected to statistical analysis the notions of Gene Sharp, an influential Boston-based proponent of nonviolent change, someone they cite frequently in the footnotes. In his work, Sharp stresses the practical utility of nonviolence, de-emphasizing the moral aspects of it. He even asserts that for Gandhi, nonviolence was more of a pragmatic tool than a matter of principle, painting a picture that's at variance with much of Gandhian scholarship. In an interview with me in 2006, Sharp declared that he derives his precepts from Gandhi himself.

Gandhi's use of nonviolence "was pure pragmatism," Sharp told me. "At the end of his life, he defends himself. He was accused of holding on to nonviolent means because of his religious belief. He says no. He says, I presented this as a political means of action, and that's what I'm saying today. And it's a misrepresentation to say that I presented this as a purely religious approach. He was very upset about that."

One of the authors of the study, Maria Stephan, is at the International Center on Nonviolent Conflict. The group's founders wrote a related book a few years ago, "A Force More Powerful: A Century of Nonviolent Conflict." Erica Chenoweth is at the John F. Kennedy School of Government at Harvard.

This study is manna for those of us who believe in nonviolent resistance as a method of social change. We don't have to justify it on moral grounds any more. The reason is even simpler now: Nonviolence is much more successful.

Posted by Unknown at 6:29 PM No comments:

Last Saturday I participated in a ritual based on poetry by Mark Prime (AKA Poetryman in the blog world) - don't burn the flag, wash it - and we did. We placed the American flag in a basin of soapy water and as we felt compelled we stepped forward and washed the flag while stating our hopes for this symbol.

I was surprised at the depth of emotion that this simple task evoked in me. As I approached the basin I felt all the years of frustration, embarrassment, anger, shame, and pride. I was working in The Netherlands when we invaded Iraq. One weekend I took the train to Amsterdam for some R&R. While there I was spit at by a group of men of Middle Eastern descent. I quickly learned to keep my American mouth closed - as soon as the accent was heard, eyes would turn my way with suspicion, and even hatred. Before I returned home Bush had already declared victory. It was a ludicrous show of American ignorance. The next morning I saw an elderly American lady sporting her flag shirt and I shook my head in disgust.

I remember when I first realized that this flag was deeply soiled with blood, pain and the repression of budding democracies. I read several sources on the history of our South American brothers and sisters. Over and over again, as the people attempted to organize to control their labor and resources our government would step in with violence, not to help them build their democracy, but to squash it so that large fruit or coffee companies could be assured a huge profit margins. Armed with the knowledge of our history, I never once believed we went to Iraq to give democracy - besides democracy never arrives on a bomb or with torture. Torture, disappearances, mass graves, etc., were not supposed to be attributed to America - but apparently we learned well the lessons of Hitler, Stalin, Saddam, etc. I wonder how much longer it would have been before American citizens began to vanish into the bowels of places like Gitmo, or under the supervision of hired torturers like the Blackwater gang. After watching and hearing testimony from the RNC I felt deep fear about the direction America was going. I was the closest I've ever been to filing papers with Canada or France for a permanent visa.

I've always loved this country. No place else has attempted the amazing social experiment started by our forefathers. In writing the Declaration of Independence, Jefferson assured that the people of this great republic can only be ruled by giving our consent, and if the government becomes destructive in it's power, it is our duty to dismantle it and begin again. November 4th revived my faith in Jefferson's wisdom.

We hold these truths to be self-evident, that all men are created equal, that they are endowed by their Creator with certain unalienable Rights, that among these are Life, Liberty and the pursuit of Happiness. That to secure these rights, Governments are instituted among Men, deriving their just powers from the consent of the governed, That whenever any Form of Government becomes destructive of these ends, it is the Right of the People to alter or to abolish it, and to institute new Government, laying its foundation on such principles and organizing its powers in such form, as to them shall seem most likely to effect their Safety and Happiness.

As my hands touched this symbol my voice trembled. I felt tears well up in my eyes. "My hope is that this symbol will no longer cause fear to those who see it but will stand for hope, justice and mercy".
Posted by Unknown at 6:55 PM 2 comments: 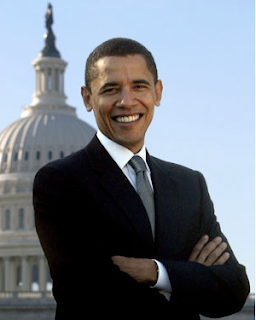 My President! Damn it feels good to be able to say that again.
Posted by Unknown at 5:37 AM 1 comment: