Before you Engage, Disengage

Last Spring I took a class on engaged Buddhism and one of our readings was Thich Nhat Hanh's book Interbeing. The book covers fourteen trainings, or precepts, to guide the engaged Buddhist. In this post I'll share some thoughts on the first. If you have thoughts to share I'd love to see your comments.

*************1*************
Aware of the suffering created by fanaticism and intolerance, we are determined not to be idolatrous about or bound to any doctrine, theory, or ideology, even Buddhist ones. Buddhist teachings are guiding means to help us learn to look deeply and to develop our understanding and compassion. They are not doctrines to fight, kill, or die for.

We are all seeking Ultimate Truth, but we must recognize that the conventional, or relative truths that we deal with in social justice and human rights are dynamic. Our version of truth is too often one sided, leaning to the benefit our own sense of righteousness. Those who protest the inhumane slaughter of whales and dolphins by Japan, but later sit down to a steak dinner, are pinched in hinge of relative truth. They can clearly see that the violence of a dolphin slaughter by others far away is wrong, but yet can turn a blind eye to the slaughter and suffering they ignorantly promote by paying for the flesh on the plate before them. A similar dilemma comes up with female genital mutilation which we take voice against, while we conveniently ignore the fact that our own infant sons endure their first cruelty from the world upon their birth with the archaic ritual of circumcision. By releasing ourselves from views and rigid dogma, we can untangle our perception of the world from our culture and religion.

Blind faith and obedience to religious leaders has caused so much sorrow in the world. Some of my first recollections of church were not kind. My parents were pleasant and friendly to people while at the church, but on the drive home they would pick them apart, speculating on this and that persons flaws, while reminding my brother and I not to repeat a word of what we heard. There were too many examples of hypocrisy in the churches we attended in my youth. It didn't seem to me that the message from the pulpit made much impression on the folks in the pews. Speech, thought and action were somehow out of sync. When we think about human nature one characteristic that seems true to me is the need for the world we perceive to make sense with the world we've constructed in our mind. When there is discrepancy in these two worlds we can either undergo personal introspection and analysis to see our way to a new level of truth or we can take the easier route and sacrifice truth and instead blame some aspect of the outside world for not matching up. To me, this is where religious extremism comes in. This isn't to say we shouldn't envision a better world in our mind and then work toward that goal. Have you ever gone a trip and had every detail work out exactly as you planned ahead of time? And when that plan didn't work out how did you respond? Did you give up and go back home, or yell at the airline attendant or taxi driver or hotel concierge? Or did you ask the locals for alternatives, did you adjust your thinking to the new truth and move forward with a smile.

One reason that Nonviolent Peaceforce is so effective is their dedication to non-partisanship. So many conflicts are delineated along national, ethnic or religious lines, so that a peace army must cautiously walk on the line of neutrality in order to build the necessary trust of all parties involved. In a time of political and religious fanaticism it is vital that the vision of the nonviolent warrior remain clear. We are living the global consequences of clinging to ideas. 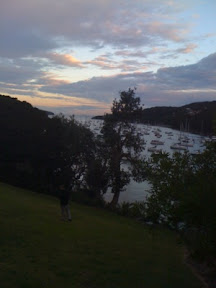 In a few hours I will be on Amtrak, headed to a week long retreat with Thay. I feel so very fortunate to have such an opportunity as this and even more so that I can share it with my daughter. I will also share with those stopping by this blog. With deep bows of gratitude.
Posted by Unknown at 9:17 PM 1 comment: