I completed my fifth year at Novellus Systems Inc where I manage the analytical lab and virtual library.  One of the benefits of this passage of time is that I was given a five week sabbatical.  So this was my year.  I was allowed to split up my time so my first week was spent at a retreat with Thich Nhat Hanh in Vancouver BC with my daughter.  The retreat posed many challenges for me, and as the Buddha would suggest, the rewards were equally remarkable.  Since my daughters birth I had come to compartmentalize my life - there's the spiritual woman on her journey to truth, the student of nonviolence, the worker and the mother.  As you may note I'm missing some crucial aspects of my life, but I'm still a work in progress.  On this retreat the biggest challenge was bridging my parenting role with that of seeker.  There was a constant tug between meeting her needs and following my own desires for the experience of mindful living in the larger community of lay followers.  After a few battles of will I finally realized that becoming the mindful parent was the beneficial outcome.  I had to let go of my attachment to a version of myself that was at odds with what I needed to be in that moment.  For the benefit of my small happy family I let go of it and came back to the present moment to give my daughter what she most needed - me.  My child is my practice just as much as sitting on a cushion is my practice or walking in nature or nonviolence.  It was not a lesson learned gracefully, but learned nonetheless.

As I looked over my calendar and contemplated my remaining sabbatical time I noticed a particularly busy time coming up in October so I scheduled three weeks off, from October 3rd through the 21st.  The USNPCA typically has it's conference the weekend of Indigenous People's Day (aka Columbus Day).  This year we decided to move it to Spring.  I decided to keep the time off scheduled so I could work on my new screen play and prepare for a training I had committed to that looked at the C-LARA technique for dialogue through the lens of trauma awareness for interested staff at Sister's of the Road.  My daughter's birthday is October 8th, so I also had a birthday party to organize. Then I had a couple web projects to start on and a presentation to give in Memphis for the PJSA/Gandhi-King Conference.

As my time off approached I watched with curiosity as the Occupy Wall Street action unfolded on September 16th.  I was pleasantly surprised by the turn out and the adherence to nonviolence.  The week before my sabbatical started I heard that Portland would begin it's own solidarity occupation on October 6th.  As I eased into my lab free days I was called by my good friend Tom to assist in a deescalation training for some of the organizers for the Occupy Portland action.  It was naturally on the same night as my training at Sisters - so I requested Sisters to reschedule and they gladly did for the following Wednesday morning.  This was my first interaction with the local Occupy team.  Most were well versed in social movements and yet we heard subtle rumblings on the "diversity of tactics" topic.  It seems that every movement is plagued by this. It's like a badly scratched record that skips to the ending before it even begins. The following morning the organizers began their rally by meeting together for prayer and meditation.  They held firm to the power of nonviolence and the people came - thousands of Portlanders came with their children and their grandparents.  I saw all generations standing there at the waterfront.  The police were relaxed and jovial.  The 99% united in a moment of truth.  It was nonviolence manifest and a beautiful thing. 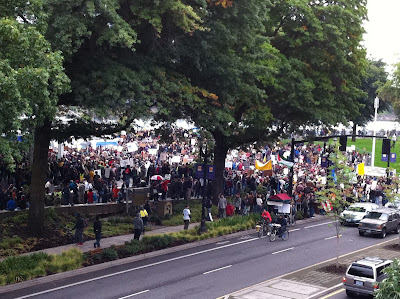 My next week started with word through the counter recruitment network that the Portland Public School Board intended to vote on Starbase again, and soon, as well as an option to allow counter recruiters into High Schools.  Another parent and myself crafted a letter for the board and principals of participating schools to please reconsider DoD Starbase, a civil-military program that introduces fifth graders to high tech military careers.   I then collected signatures from local organizations to increase the impact of our humble request.  We collected 25 organizational signatures.  I had also started a petition in September that asks the Board to end this program.  By the night of October 17th, the night of the vote, we had 141 signatures to present them with.  One of the parents who had originally started the movement 6 years earlier lost her temper during the proceedings, undermining our effort to remain respectful and professional.  When thinking about 10 year olds being bussed to a military base for a week of physics fun followed by career counseling on military jobs, it's easy to lose one's hold on emotions and slip into a tantrum, but as a strategy for success it rarely works.  Working against militarization of youth in our culture has taken a front seat in much of my work.  Even the presentation I would give the following week in Memphis was on this topic.  So few realize how insidious this is, but when you begin to read comments in local papers that rant about the "anti-war" people, the veil will lift.  Etched into the angry words is a common fear that the American way of life is not only wrong for the planet and the life on it, but inherently evil.  Programs like Starbase attempt to indoctrinate the next generation into this accepted view that the U.S. is at the top due to it's military, it's willingness to use violence and Divine sanction.  It's my hope, and those of others in this work, to broaden the American vision to include the rest of the world.

While in Memphis the angry parent from the board meeting proceeded to verbally assault members of the Portland Public School board via email.  The language was violent, even inappropriately employing curse words and repeating obscene military chants.  She went to the extreme of tying Starbase to the tragedy in Columbine and pointing her finger in blame to these people if any such tragedy were to happen here.  Admittedly there is a connection between militarism and cultural violence, but we must also consider media, parental acceptance of guns and gun violence, access to guns, bullying, and a host of other issues.  If I believed that ending this program would eradicate all potential for violence for our children, I'd make the ultimate sacrifice to stop it.  But it's only one cog in a much more complicated machine.  Remaining true to my convictions I intervened in the discussion sending a private email to the parent asking that she take it down a notch and suggesting she might look into a workshop on nonviolent communication.  My intervention worked, but not the way I'd hoped, as all her rage turned from the board member toward me.  Her vitriolic reply was copied to all, enraging yet another of the group.  When one other activist in our group defended my stand he also became the object of her scorn as she ranted about our personalities and how we live our lives but not about our tactics, or what was really the core issue causing her anger.  The second person that defended her argued for the diversity of tactics, justifying any language necessary to shock the board members.  No matter how unlikely it is that cussing out the board members will result in a vote in our favor, they insist on the right to do it as representatives of the group.  As a result I have largely withdrawn from the group but continue to work with other groups that have adopted a clear nonviolent code of conduct.

During the conference in Memphis we were gifted by the presence of many academics, K-12 teachers and activists from across North America.   Occupy Memphis was in full swing and many from the conference joined them for a march to the Lorraine Hotel, where MLK Jr. was assassinated.  As I watch the Occupy movement grow in number Dr. King often comes to mind.  I believe his work to bring poverty to the attention of the world was what motivated his assassin.  He would be so proud of this new Occupy movement.  Maybe one day the rich will realize that the best way to stay in positions of advantage is to make sure there is no poverty.  Dolores Huerta gave a cheer for the 99%, "Si, Se Puede" - Yes We Can.  Another great soul Pancho Ramos Stierle told us about Karma Kitchen and how we all should practice radical kindness.  I had met Pancho years before in Oakland while there for an educators for nonviolence conference.  Then he and his family stayed with us at Whitefeather and my daughter just adored him.  He gives the best hugs and simply exudes loving kindness to all he meets.
While at the conference I listened to a great panel discussion on principled versus strategic nonviolence.  What I loved most was that the question of nonviolence was not at issue, there was no talk of the diversity of tactics amongst this esteemed group of panelist including Michael Nagler, Matt Meyer, Elavie Ndura, and Daryn Cambridge.  Gene Sharp provided 198 nonviolent tactics in his book and since then at least that many more have been added.  There is no shortage of diversity of tactics.  Maybe tactic is the wrong word, it's more like a vibe.  Will the movement honor a welcoming grandparents and child friendly vibe so that the real 99% can participate.  Or will it take on an adversarial and violent vibe that only the young and immortal can participate in.
My three weeks of corporate freedom have long since ended.  I watched as the Nov. 2nd General Strike happened in Oakland - amazed by the people power.  The next morning I was saddened to see that the diversity of vibes had won the media with images of violence. But on the morning of the 14th I saw this image, of my friend Pancho Ramos Stierle, mediating at the Occupy Oakland.  He was one of 32 people arrested during the sweep early Monday in Frank Ogawa Plaza.  Now he faces deportation.  His action has brought awareness of the growing issues facing our immigrant population along with the issues already being forced into the open by the Occupy movement.  Looking at the various images from Oakland, it is with Pancho that I most resonate and feel the force of peaceful protest.  I would gladly take my daughter with me to sit with Pancho.  He has learned the lesson that I struggled with in August, and that the angry parent from Portland still struggles with - sometimes we have to let go of our own narrative and do what's best for the larger family of One. After all, isn't that what we're asking the School Board to do, the police, the politicians, and the 1% - how can we do any less. 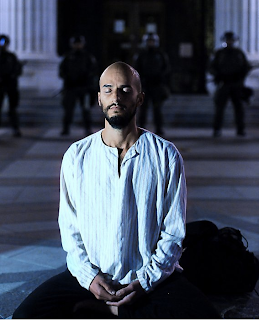 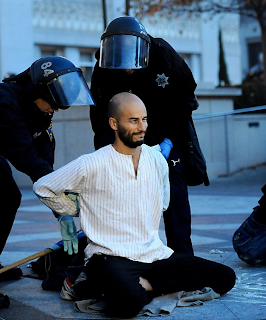 Pancho's arraignment is at 2pm on Wednesday the 15th.  Please sign this petition for his release.  If you are in Oakland, be a peaceful presence at the courthouse.  Thanks!
http://www.change.org/petitions/free-pancho-now
Posted by Unknown at 1:38 PM 1 comment: