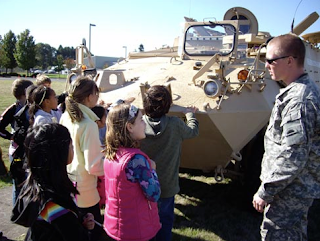 In other countries children are abducted from their beds and forced to serve in a military.  In our country the child recruiters don't have to go to all that trouble, they have full access to our children at school.  Not only that, but the school provides the Department of Defense with the personal information on our children, unless we fill out a form to "opt-out".  Under the No Child Left Behind (a program that becomes more sinister as we learn the military implications of this program) schools are required to report to Uncle Sam certain demographic information on our kids.  Is your child struggling with math, chemistry, etc.?  Is your child late or absent often?  Is your child from a single parent home or on reduced lunches or from a poor neighborhood?  Uncle Sam wants to know if your child fits any of these markers.  If so your child will become the target of aggressive recruitment.  But now DoD has taken another big step in recruitment strategy.  Rather than go to the schools to recruit, the schools are bringing the kids, K-5, to the military bases under the guise of science, technology, engineering and math (STEM) education.  Here, your child will be told about all the great career opportunities available in the military (but they won't hear about the realities of war or what these machines they are being allowed to touch and experience do to the children in Iraq and Afghanistan).


The US is struggling to maintain it's military strength over the world.  We have over 1000 bases spread across this globe, residing on sovereign lands of other people.  We make and sell over 70% of the arms and weapons used to kill human life on this planet.  We are The Empire on this planet.  In the 80's it was recognized that more and more of the capability to kill mass numbers of people on the planet's surface depended on our dominance in space.  Now our soldiers use space technology and robotics to target and kill from a distance.  As our military becomes more technologically sophisticated, it needs kids that can do math and have a basic understanding of science to maintain this Empire.

June 2, 2005 the Industrial College of Armed Forces published a report, U.S. Defense Industrial Base:  National Security Implications of a Globalized World.  In this document is a section on human capital strategies, and here we learn more about DoDs recruiting efforts using it's Starbase program.  Other industry that requires STEM expertise can fill that need with foreign workers.  DoD can't use a Chinese nationalist to spy on China, or trust them to follow through when the time comes to kill their own.  For this DoD must cultivate the human capital here at home, and so they've come up with this insidious plan to convince children at an early age that the military is a force for good in the world, and can also be a way for them, underprivileged as they are, to get ahead in the world.

To some war hawk supporters this may seem a perfect marriage.  It's a way to eliminate the next wave of poor on the streets and fill the military with more sacrificial lambs.  This thinking is classism and racism.  Rather than spend the $20 million on classes on military bases, let's use that to build better science labs in the schools.  Rather than recruiting future soldiers, let's recruit and pay better teachers.  For parents who want their children to be militarized, encourage them to join ROTC and that subset of kids can go on field trips to the military bases.  Just keep in mind that these military bases store toxic materials (i.e. jet fuels) and were not designed for children.  Also, we're a country in perpetual war, so a military base may not be the safest place for your precious child.  You might also want to evaluate your core values and principles.  War is never good for children.

There's been much in the news about the disturbing level and acceptance of violence in American culture.  We have a zero tolerance for weapons on school campuses, yet we allow our children to be taken to military bases to see the big exciting killing machines.  If we really want to cultivate a culture of peace, we must stop programs like Starbase.  We must pull the plug on Big Brother's access to our children's personal information or at least insist that our children get all the information by allowing counter recruiters to sit side by side with military recruiters.  Our children need us to take a stand now.

The board of Portland Public Schools will be voting on whether to renew this program as soon as February 22nd (unless they postpone it again).  Maybe you're not in Portland but want to know if this program is targeting the children in your area, find out here.  If you are a PPS parent and would like to voice your concerns to the Board, their emails can be found here.  Thanks for standing up.
Posted by Unknown at 6:13 AM

Well, I just learned a LOT. Thank you. I wish everyone knew all this. It hurts so sharply to think of these small children being sucked into the military maw. And by the way, this vision of a robotic armed forces future would INCREASE, not decrease, the number of poor on US streets, since this is so capital-intensive, not labor-intensive. It would increase numbers of poor and thus maintain that recruiting advantage of being able to target poor children. That is the perfect marriage for the war system. Ish. I stand ready to offer nonviolent resistance to this. I can think of no greater offense than to invade and occupy the sweet young hearts and minds of our children by the forces of the Department of Death.

Shortly after my son turned 18 in his senior year at Benson HS, he received a phone call from army recruiters. I had made sure I checked the box on the reg form refusing to allow my son's information to be shared with the military. But alas, that didn't seem to matter. It happened anyway. I called Benson and only got an oral apology.