Training the Terrorists - An American Specialty 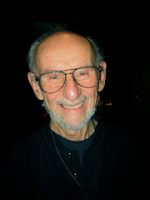 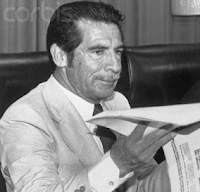 Of the two men pictured above, which would you prefer to have walking free in the world?  One was trained in Fort Benning Georgia at the School of the Americas (now Whinsec) and was later responsible for massacres, rape, torture and acts of genocide against the indigenous peoples of Guatemala.  The other was sentenced yesterday to 6 months for trying awaken your conscience to close this school of assassins.  I know my preference.

The kindly looking man with the warm smile is Fr. Louie Vitale, age 77.  Last November 20-22, as most Americans were thinking about what to cook up for Thanksgiving, Louie and over 10,000 others congregated outside Fort Benning as part of an action organized by the SOA Watch.  Besides Fr. Louie, two others were sentenced to the maximum of 6 months, Nancy Gwinn, 63, of Syracuse NY and Kenneth Hayes, 60, of Austin TX.  One other man, Michael Walli of the Washington DC Catholic Worker, refused to appear in court.

For those not familiar with the training provided by SOA or the illustrious man pictured above, here's a brief history lesson from Wikipedia:


The Western Hemisphere Institute for Security Cooperation (WHISC or WHINSEC), formerly the School of the Americas (SOA; Spanish: Escuela de las Américas) is a United States Department of Defense facility at Fort Benning near Columbus, Georgia in the United States.

Between 1946 and 2001, the SOA trained more than 61,000 Latin American soldiers and policemen. A number of them became notorious for human rights violations, including generals Leopoldo Galtieri, Efraín Ríos Montt and Manuel Noriega, dictators such as Bolivia's Hugo Banzer, some of Augusto Pinochet's officers[1][2], and the founders of Los Zetas, a mercenary army for one of Mexico's largest drug trafficking organizations, the Gulf Cartel.[3][4] Luis Posada Carriles was educated there in 1961, although he never graduated.[5][6][7] Critics of the school argue that the education encouraged such internationally recognized human rights violating practices and that this continues in the WHINSEC. This is denied by the WHINSEC and its supporters who argue that the alleged connection is weak. According to the WHINSEC, the education now emphasizes democracy and human rights.[8][9]

On June 28, 1996 a Report issued by the Intelligence Oversight Board stated that «School of the Americas ... used improper instruction materials in training Latin American officers from 1982 to 1991. ... certain passages appeared to condone practices such as execution of guerillas, extortion, physical abuse, coercion, and false imprisonment.»[16]

On September 20, 1996, the Pentagon released seven training manuals prepared by the U.S. military and used between 1987 and 1991 in Latin America and in intelligence training courses at the U.S. School of the Americas (SOA). The manuals were based in part on lesson plans used by the school as far back as 1982 and, in turn, based in part on older material from Project X.[2] According to Lisa Haugaard of School of the Americas Watch, these manuals taught repressive techniques and promoted the violation of human rights throughout Latin America and around the globe.[17] The manuals contain instructions in motivation by fear, bounties for enemy dead, false imprisonment, torture, execution, and kidnapping a target's family members. The Pentagon admitted that these manuals were a "mistake".[18]

After this investigation the Department of Defense discontinued the use of the manuals, directed their recovery to the extent practicable, and destroyed the copies in the field. U.S. Southern Command advised governments in Latin America that the manuals contained passages that did not represent U.S. government policy, and pursued recovery of the manuals from the governments and some individual students.[19] Notably, David Addington and Dick Cheney retained personal copies of the training manuals.[20]

In 2004, Venezuela ceased all training of Venezuelan soldiers at WHINSEC.[21] On March 28, 2006, the government of Argentina, headed by President Nestor Kirchner, decided to stop sending soldiers to train at WHINSEC, and the government of Uruguay affirmed that it will continue its current policy of not sending soldiers to WHINSEC.[22][23] In 2007, Oscar Arias, president of Costa Rica, decided to stop sending Costa Rican police to the WHINSEC, although later reneged, saying the training would be beneficial for counter-narcotics operations. Costa Rica has no military, but has sent some 2,600 police officers to the school.[24] In a letter to the Commandant of the Western Hemisphere Institute for Security Cooperation (WHINSEC), U.S. Army Col. Gilberto Perez, Bolivian President Evo Morales formally announced on February 18, 2008 that he will not send Bolivian military or police officers to attend training programs at the institute formerly known as the U.S. Army School of the Americas (SOA).[25]

A bill to abolish the school with 134 co-sponsors was introduced to the House Armed Services Committee in 2005.[26]
In June 2007 the McGovern/Lewis Amendment to shut off funding for the Institute failed by 6 votes.[27] This effort to close the Institute was endorsed by the non-partisan Council on Hemispheric Affairs who called the Institute a "black eye".[28]


The man pictured above next to Fr. Louie is Jose Efrian Rios Montt, leader of the military regime in Guatemala in 1982-1983, later de facto President.  The atrocities committed under his leadership included torture, rape, and genocide of entire villages in some of the most brutal and barbaric fashion.  After reading Sister Diana Ortiz' account of her abduction and torture one cannot help but want to close the SOA.  America has been supporting the most heartbreaking stories of repression in Latin America, using this school to train assassins who have the ability to pull out and infants fingernails in front of the mother, only to cause her agony prior to cutting her throat.  Is this the America that we want to project into the world.  Thanks to a whistleblower in Abu Gharib we know what atrocities we are capable of.  It's time to speak truth to power and say "no more torture".

Still today we struggle to get the records released on the CIAs involvement in torture in Guatemala.  The picture of Montt that I have pasted above is cropped from a larger picture that I encourage you to take a look at (and read the story associated with it), here.  Yes, it is who you think, the Gipper.  The dream man of the Republican party, but a nightmare to the indigenous peoples of Latin America.

If torture and repression on the rule of dictators is something you find intolerable, as I do, please take some action.  I'm not asking anyone to get arrested or go to prison, unless you feel called to do so.  All I ask is that while Fr. Louie, Nancy and Kenneth are serving their time, send at least one thank you note to each.  I will post where to send correspondance as soon as that is availalbe.  Also, continue to support the closure of this school and the release of CIA records.

Father Roy Bourgeois, a Roman Catholic priest and the founder of SOA Watch, the organization that works to close the School of the Americas said "Judge Faircloth has sentenced our sister and brothers to 6 months in federal prison for speaking the truth about the SOA/WHINSEC. We are saddened by the court's continued blindness and hardness of heart, but we are stronger than ever in solidarity. These sentences are symbolic of our nation's misdirection, but they are also great steps forward for our resistance movement. It is truer today, than ever before, that although they jail the resisters they have not, and cannot, jail the resistance!"
Posted by Unknown at 9:54 AM

Thank you for this. Our nonviolent resisters are so often ignored and so are the crimes of those we support via military aid--arsenals and the training to use them. In Portland, for example, few know that peaceworkers Ann Huntwork and Chani Geigle-Teller spent months in federal prison for their nonviolent resistance to the School of the Assassins. As a former inmate for my nonviolent community service, I can only thank you for your commitment to communicating with those locked away in the name of nonviolence. Mail is simply crucial to our well being when society decides that we are so dangerous we must be held in cages behind high walls.

I've just heard that Howard Zinn has crossed over, of a heart attack in California. Howard Zinn, Presente! Gracias.